Upright Egg Theatre Company presents Songbird , a new company-created event! Inspired by Hans Christian Andersen’s “The Nightingale” and real and alternate histories. Inventor Zebulon Volt finds himself stymied in a steampunk world, his present eclipsed by an unrequited past. Through movement, live music, and puppetry Zebulon scientifically observes and engages in a Victorian world of dichotomies: nature/machine, love/loss, and healing/sacrifice. 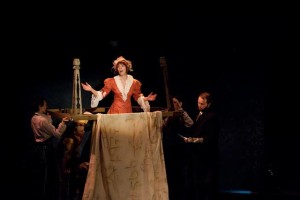 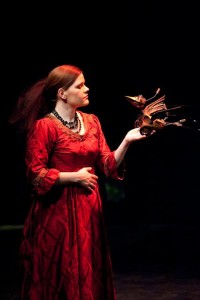 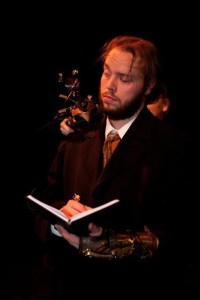 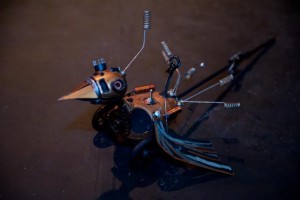 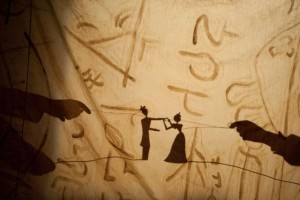 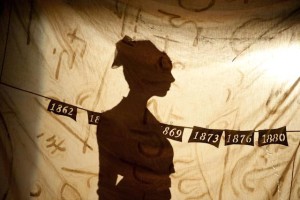 Written by Brian Watson-Jones
Brian Watson-Jones is an Upright Egg company member, and has taken part in a dozen or so of its shows over the years. He has mostly been a performer, from Central Character to Guy Standing In The Back Trying To Look Important, and while he has contributed bits and pieces of writing in the past, this is the first time he was fully worn the mantle of ‘playwright’. He was most recently onstage in the Egg’s “VENUS: A Play About Energy” and Commedia Beauregard’s “A Klingon Christmas Carol”, for his fourth year running as Nephew Vred. Next up is Tedious Brief Productions’ “Tempests” with the Minnesota Fringe, where he will be both co-playwright and an evil, flesh-eating fairy.

(lemme know if this is too long, or doesn’t fit thematically with the others)

(that last bit wasn’t bio- don’t include it)

Directed by Mark Benzel
Mark Benzel is a company member with Upright Egg Theatre who has worked with companies such as Sandbox Theatre (Unspeakable Things and The Horse, The Bird, The Monkey and The Dancer), Walking Shadow (Mojo and The American Pilot), Upright Egg (Love Project, Chuck Mee Project), 20% Theatre Company (elephant shoes and olive juice), Old Log Theater (Treasure Island), and Live Action Set (Happy Show and The 7-Shot Symphony). He thanks friends, family, and every one of the many hands who touched this show. Up next: 7-Shot in Chicago (July) and Florida (January).

Stage managed by Megen Edstrom
This is Megen’s first UE production and is thrilled to be working with a bunch of new friends for her first ensemble piece. Megen has worked with several theatre companies around the metro. Some of which being Off-Leash Area, Theatre in the Round, Cromulent Shakespeare, Theatre Latte Da and Park Square Theatre.

Sound Design by Jason Bucklin
UE Company Member Jason Bucklin has been with Upright Egg since the start and has been a sound designer in the Twin Cities for the last 4 years. This summer he plans on being outside either on a bike, in a lake or around a fire pit.

Musicians: Lewis Kuhlman, Peter Schultz, Paul Shallcross and Ross Charmoli
Lewis has been a musicians since 2000 when he began playing bass guitar. He has performed and recorded albums with Half Dug, Two Eyes for the Dead, and Washing Away. He received a music degree from Winona State University in 2005.

pleeschultz (born Peter Lee Schultz) is a great dancer. He likes physics, physiques, and will go into space one day. In some circles he is known as RiceCrispyAdams (president of snacks). If he has the energy, and a good bike, he can travel almost anywhere swiftly and brightly. He has vices but is handsome.

International Man of Mystery Paul Shallcross is a MacNally Smith student just making his way in the world. This is his first Upright Egg project.

Born and raised on sod field plains. Guess I Grew up like any American. Too much television and growing pains. Somewhere along the way I have been swept up in a current of art and dreams. In which I love all forms. Old. New. bold and unsure. Find me vexed when asked what is what and which is best locked away in my treasure chest without a key around my wrist. If you wanna chat more about me tap my back and I’ll be pleased to tell you all I am ya see as I shake your hand quite gladly. Peace.

Julia Carlis is a freelance lighting and scenic designer and a Theatre Pro Rata Company Member. Her work has also been seen previously with Theatre Unbound, Eclectic Edge Ensemble, Yellow Tree Theatre and North Hennepin Community College, among others. In the near future, she will be designing for Send in the Jazz with Eclectic Edge (July) and Pro Rata’s Cat’s Paw (September). In the rest of her life, she wears many hats including librarian, dilettante gardener, knitter and pie baker. Her favorite steampunk book is probably Leviathan by Scott Westerfeld.

Derek Lee Miller constructs furniture, properties, puppets, scenic elements and various accouterments when he is not otherwise occupied with other multifarious artistic pursuits. On a multitude of stages in our modern Cities, he has entertained the populace by impersonating myriad conjurers, rakes and arcane devils, including, though not limited to: the savage spearman Tashtego in Jon Ferguson’s Or the White Whale; the wistful accordionist in Ballad of the Pale Fisherman; and the demon Mephistopheles in Sandbox’s .faust. Mr. Miller is a long-time associate of that autonomous artistic collective, Sandbox Theatre.

Mandi Johnson is enthusiastic about working with Upright Egg for the very first time. She has been working as a freelance costume designer about town for several years, and is the resident costume designer with Theatre Pro Rata. She also serves as a costumer at Norcostco. Recent projects include; Beyond Therapy (Theatre in the Round), Dido, Queen of Carthage, The Taming of the Shrew (Theatre Pro Rata), Unspeakable Things: The Wandrei Brothers Project, (Sandbox Theatre).

Zebulon’s Gauntlet by Kyle Carlson
Kyle Reese Carlson is an aspiring prop/set designer from Los Angeles and founder of the underground art collective known as Company Awesome. While tending to be a little short-winded about himself, he is the polar opposite in regards to his projects. Currently he is building a new respirator for his post-apocalyptic raider outfit, troubleshooting the pump design for his arm-mounted flamethrower, designing a female counterpart to the gauntlet seen in the play “Songbird “, and working on the mounting and ventilation of a functioning dual-hose gas mask which hooks up to a hookah backpack.

“Design above your skill level, then improve.” ~Kyle C.

Anissa is thrilled to be working with Upright Egg for the first time ever! She’s also been seen locally with companies such as Theatre Pro Rata, Theatre in the Round, and the Flower Shop Project, among others. Anissa is fascinated by Upright Egg’s creative process, and loves the fact that she’s working on a project where she is encouraged to geek out about alternate histories and Queen Victoria. Next up: hanging out with super heroes in “The Duties and Responsibilities of Being a Sidekick” showing at the 2011 Minnesota Fringe Festival.

Kristin Foster has performed with several Twin Cities theatre companies over the years, including Theatre Unbound, Commedia Beauregard, Nightpath Theatre, Shakespeare & Company, Chameleon Theatre Circle, and In The Basement Productions where she also served as Artistic Director. This is her second show with the creative force that is Upright Egg, and she is thrilled to be a part of this steampunk dream.

Kate, graduate of the U of M Twin Cities in Theatre and Art, is thrilled to be working with Upright Egg again, and this time, sans violin. Kate first crashed the Egg party in Venus, and cant believe her luck to get to play with these marvelous folks again. Kate was most recently seen in Nimbus Theatre’s ‘The Balcony’, and Classical Actor’s Ensemble ‘Tis Pity She’s A Whore’. She is currently looking forward to her 3rd tour with educational theatre company GTC Dramatic Dialogues this fall.

Martha Heyl has never been involved in a show like this before. This is her first show with Upright Egg. She is currently attending Hamline University, where she is the co-founder of Hamline’s Improv Troupe, two-time winner of Hamline’s Five-Minute Film Fest and has performed in a number of shows, including The Ashgirl, directed by Bob Rosen. She has been in six staged readings with the American Shakespeare Repertory. She has written seven one-acts, four of which were translated and performed in Lohne, Germany in 2010. She has been to Space Camp twice and makes a mean Senegalese peanut soup; she’ll make you a bowl sometime.

An Upright Egg Company member, Brian O’Neal has been an actor, director, lighting designer, movement coach, stage manager, collaborator and friend of the Egg for five years, and he wouldn’t do all that stuff for just anyone. He has performed outside of the Egg with Theatre in the Round, Theatre Mu, nimbus Theatre, In The Basement, Commedia Beauregard among others in the Twin Cities and in New York with Superhero Clubhouse. Many thanks to all the people that have made this show possible, it’s been quite the ride.

Larissa Shea
Oh hi! Larissa Shea has been a company member with Upright Egg since the summer of 2009. Some past company projects include ReCollect (ensemble), Magnitude of a Freckle (Mom), A Midsummer Night’s Dream (Puck), Present Projects ’08-’10, and most recently VENUS: a play about energy (spoiler alert! Venus). VENUS was a collaboration with NYC-based Superhero Clubhouse, a green theatre initiative that Larissa continues to work with. Other local credits include Red Letter Theatre’s Phaedra’s Love (Strophe), Mad Munckin’s Snowbound! (puppeteer), and most recently Off Leash Area’s Now Eye See You…(ensemble).

Josh Vogen
Josh has been lucky enough to work with Upright Egg on a few shows now, and will never stop being amazed by their creativity and desire to produce innovative, thought provoking theatre. It is always a joy to build a show with the Eggers and to share some magic with our community. Recently you may have seen Josh in Freshwater Theatre’s Awkward Moments or Upright Egg’s Venus. Next he will be tackling a beautiful script called Love Song with the brand new Buoyant Theatre Collective at the Lowry Lab in July!